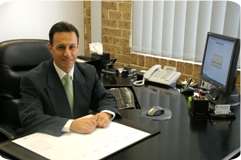 Peter has lived in Penrith all his life. He attended St Dominics College and gained his Bachelor of Commerce Degree at the University of New South Wales. Peter is a fellow member of the Institute of Chartered Accountants, a registered company auditor, a registered tax agent and a Justice of the Peace. He is also a past member of the executive of the Penrith Chamber of Commerce. Peter was awarded Honorary Membership of the Centre in October 2008 for 20 years of service to the Board.